Finding contemporary art in Florence was not as challenging as I thought it would be. When I arrived in the city, my attention — like that of the majority of tourists — was immediately drawn to the history and classical art. But the idea of contemporary art in a Renaissance city fascinated me, and after I started researching, I found an incredible selection of contemporary exhibits.

I saw this initially at the Van Gogh Alive exhibit.

While Vincent Van Gogh is not a contemporary artist, the transformation of the Santo Stefano church into a room of moving projections on every wall is contemporary. Walking into the church was nothing like walking into the Uffizi or the Academia.

The Forte di Belvedere, built in the late 1500s, also showcases a number of contemporary art exhibits. The most recent is “Human,” a display of iron sculptures by English artist Antony Gormley.

The program for the exhibit explains that the sculptures, placed throughout the Forte, are meant to create “a dialogue between anatomy and architecture.” They are life size and force viewers to think about how we interact with the space around us.

Students at the Studio Art Centers International utilized an historic space to display their contemporary works from their class Body Archives. The exhibit was held in the Museum of Natural History’s La Specola. The students’ modern representations of the body were juxtaposed with the museum’s ancient representations.

Another major theme I saw as I visited contemporary exhibits was the way the art itself represented both classical images and contemporary methods.

The most vivid example of this is the “Sculptures Also Die” exhibition at Palazzo Strozzi, which is open until July 26. As the image on the cover of the program shows, the pieces in this exhibition utilized classical sculptures, but made them contemporary. In one room, artist Oliver Laric’s pieces — three heads like the one pictured — lay on a platform in the center. Each one was painted with different colors. Taped to the walls of the room were 3D scans of Hellenistic statues that were on display in Palazzo Strozzi’s exhibit “Power and Pathos” a few floors above the “Sculptures Also Die” exhibit.

In another room of the exhibit, a clay sculpture by artist Mark Manders resembles historical models yet has contemporary features. A bright yellow rectangular prism appears to be emerging from the right side of the clay sculpture’s face, extending from the top of the nose to the bottom of the mouth. Strands of hair were also added to the left side of the sculpture.

I saw a similar contrast between the past and present in the works of artist Gianni Dessi, which are on display at the Galleria Alessandro Bagnai until May 23. When visitors enter the gallery, they are confronted with a large yellow mural in the corner of the room. The only other piece of art in the room is a sculpture of a head with a painted yellow stripe down the center.

In another room of the gallery, a larger head hung from the ceiling. This sculpture appeared to be splattered with yellow paint. The pieces reminded me of the pieces in the “Sculptures Also Die” exhibit, as they resemble past models of sculptures, but are not traditional. 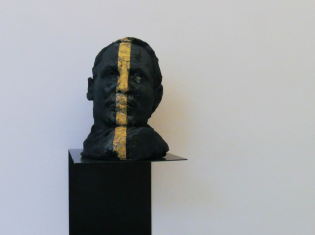 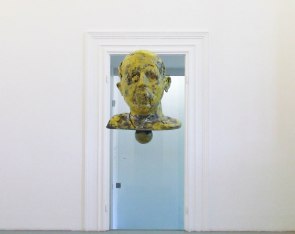 The way these sculptures portray classical models in new ways can also be seen in other art mediums as well. In the Tornabuoni Arte gallery on Via Maggio, the works of Italian artist Gioacchino Pontrelli are on display. I was immediately drawn to what appears to be an ionic column in one of his abstract paintings. While this is not a trend in all of his works, I found it interesting to see an example of Italy’s ancient architecture in a contemporary art piece.

Across the street from the Tornabuoni Arte gallery is the Eduardo Secci Contemporary gallery, which is currently showing works by Italian artist Maurizio Donzelli. In the center of the room, a large wooden geometric shape with 20 sides (also known as an icosahedron) hangs from the ceiling.

His works explore geometric shapes mainly through experimentation with mirrors. The pieces that hang on the walls change depending on the angle you view them from.

These works are pieces that are comparable to the type of modern art seen in other parts of the world. They show that Florence can be just as contemporary as New York or London or anywhere else.

Another gallery devoted to contemporary art is Le Murate. There are a variety of exhibits at this gallery, but one that stood out to me was an exhibition called “Long Distance.”

Students from the Master of Fine Arts in Studio Art program at the Studio Art Centers International present works that utilize space, but also contain two-dimensional pictorial components. All the pieces were incredibly different from each other and their meanings were not always clear. They revealed the many different types of interpretation and representation that artists can utilize today. 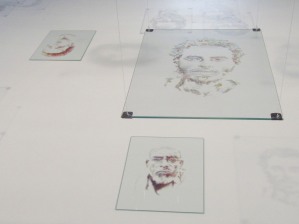 By visiting these art galleries and exhibits, I discovered that people can easily overlook contemporary art in Florence — I was often one of few people in the galleries — but it most definitely exists. Other spaces include the Galleria ZetaEffe, the Galleria Frascione Arte, Tethys Fine Art Photography, the Galleria il Ponte, the Museo Marino Marini and more. While this type of art may not be the reason people are attracted to Florence, not recognizing it would be missing out on an incredibly interesting and beautiful part of the city.