The giant bronze turtle that has appeared, seemingly overnight, in the middle of Piazza della Signoria seems out of place in a square full of renowned Renaissance masterpieces, but adds to its theatricality. The shiny sculpture rests on a platform and is topped with the figure of a man holding reins, bearing a striking resemblance to Valerio Cigoli’s “Fountain of the Little Bacchus” (1560), a statue in Boboli Gardens of Nano Morgante, Cosimo I de’ Medici’s court dwarf, sitting on top of a turtle. The turtle was a symbol of the Medici family and embodies the Latin motto the family adopted “Hurry slowly,” which is more recognizable as the “slow but steady wins the race” moral of Aesop’s fable “The Tortoise and the Hare.” The sculpture, which echoes an equestrian statue, has been placed in front of Giambologna’s “Equestrian Monument of Cosimo I,” a depiction of Cosimo I de’ Medici, who became the Grand Duke of Tuscany in 1569, on top of a horse preparing to head into battle (Cosimo was also responsible for commissioning Georgio Vasari to build the Uffizi). The turtle’s artist, Jan Fabre, uses the placement and subject of this statue to once again open a dialogue in Florence between the contemporary and the Renaissance, taking it a step further by inserting a portrait of himself into the piece – he is the man riding the turtle – which was a tradition in Renaissance art.

The sculpture, “Searching for Utopia,” is part of “Spiritual Guards,” an exhibit by Belgian artist Fabre that opened on April 15. The three-part exhibit currently has works in Piazza della Signoria and Palazzo Vecchio, and more will be featured at Forte di Belvedere beginning May 14. The entire exhibit runs through October 2.

Another work by Fabre graces the entrance of Palazzo Vecchio, giving a preview of the exhibit that lies within. “The Man Who Measures the Clouds (American version, 18 years older)” is a bronze sculpture of a man standing atop a ladder, looking up at a ruler that he is holding up to the sky. This statue is situated between copies of Donatello’s “Judith and Holofernes,” the story of a woman named Judith who seduces an Assyrian general who is going to destroy her home, gets him drunk and decapitates him once he falls asleep, and Michelangelo’s “David.” Fabre’s sculpture is minuscule in comparison to these two monumental works and serves as a commentary on the idea that size is relative: A man atop a ladder cannot measure the sky any better than a giant or even the Arnolfo Tower, which seems to reach the sky itself. Fabre’s man is also a contrast of Judith and David, who were underdogs that overcame their opponents – he will never be able to achieve his goal of measuring the clouds.

Fabre is known for his bizarre and unconventional art: He once decorated the exterior of an entire building with BIC pen drawings; he uses strange materials like the wing casings of buprestidae, more commonly known as jewel beetles, and his own blood; in 2012 he filmed himself throwing cats up a flight of stairs for a controversial performance piece. This exhibit may seem odd, but it is right up Fabre’s alley. Some of the pieces are downright disturbing, like “Salvator Mundi” (1998), a sculpture of an armored hand and forearm holding a sphere of black beetle caracses, from which a spinal column rises. Flowing white hair is fixed at the top, giving the appearance of a dismembered skeleton. Another is “Skull with Squirrel” (2012), which is exactly what it sounds like: A replica of a human skull made out of jewel beetle wing cases with a stuffed squirrel grasped in its jaw.

The location of this exhibit is the most interesting thing about it. Fabre’s eerie and modern artworks are placed in rooms with gold-gilded ceilings, faded frescoes and deteriorating statues. It is like simultaneously having one foot in the past and one in the future.  This feeling is captured by Fabre’s “Globe” (1997). This globe resides in Sala delle Udienze (Hall of the Audiences) and two rooms away, in Sale delle Mappe Geografiche (Hall of Geographical Maps), resides Egnazio Danti’s terrestrial globe (1567). When standing in the middle of the room that separates them, the iridescent green and blue hues of Fabre’s globe – which is made with jewel beetle wing casings – can be seen on one side, offering a stark contrast with the faded wood and iron of the older globe on the other side. If Fabre’s intention was to interact with these old masterpieces, it benefits him that both globes can be seen when standing from one position.

These five sculptures are just a peek into the mind of Fabre and the exhibit. “Spiritual Guards” features works created by Fabre from 1978 to this year, and includes sculptures and performance films. It was curated by Melania Rossi and Joanna De Vos and its artistic director is art critic and curator Sergio Risaliti.

Palazzo Vecchio is open from 9 a.m. to 11 p.m. Monday through Wednesday and Friday through Sunday, and 9 a.m. to 2 p.m. Thursday. Admission is €10 full price and €8 for students. 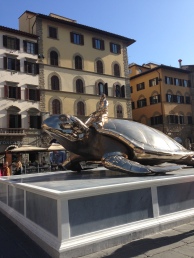 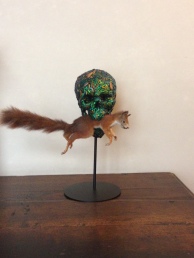